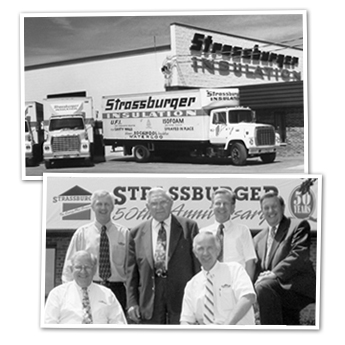 In 1977, a 16,000 square foot facility was constructed on Colby Dr. in
Waterloo. With the introduction of new government building standards
and incentive programs, Strassburger Insulation saw the future of
re-insulating homes being cut short by 15-20 years. Other means of
home insulation were investigated and in 1984 Strassburger made
their first vinyl window. A 21,000 square foot expansion of the Colby
Drive facility soon followed; 10,000 square feet dedicated to window
and door manufacturing.   For the next 10 years Strassburger promoted
both insulation and windows as a total energy saving package.

When the opportunity arose to concentrate all their efforts on producing
a world-class fenestration product, Strassburger sold the insulation side
of the business. In 1998 manufacturing started on high-energy thermo
units for the windows.  In 2002 another addition was built to make it
possible to manufacture PH Tech’s entire Boreal vinyl window system
and add new options and accessories to the product lines.

In 2004, Morgan Jr. retired and Bob and Dennis took over the family
business as co-Presidents.   By 2007 Strassburger Windows and Doors
had outgrown the Colby Drive property and 5 acres of land was
purchased on Shirley Drive in Kitchener.  At the 2007 company
Christmas party, the drawings for a new building were unveiled.

Construction of the new Kitchener premises started in March 2008.
Strassburger Windows and Doors moved into the new 92,500
square foot facility in September of that same year.          More >