In 1949 Morgan Strassburger Sr. started a roofing business out of a three-bedroom home with a pickup truck and one employee. It was also home to ten of what would become twelve children. He soon realized if the company was to be successful he would need a place to run the business; outside the family home.

In 1951 property was purchased in Kitchener and a 3000 sq. foot building was erected. At this time the installation of insulation was added to the business. Two sons, Morgan Jr. and Albert joined the company; they were the first of five sons to join the family business. They helped to explore new business opportunities in the insulation, renovation and siding markets. Along with these new products came the manufacturing of fibreglass awnings for shading.

In 1959 several additions were added to the building to accommodate growth. A 2000 sq. foot hardware store was built on the property selling everything from a single screw to lumber, trim, shingles, lawn and garden tools and furniture along with household paints which were mixed in the store.

By the late ’60s and early ’70s three more sons, Bob, Cliff and Dennis joined the company. The business was changing and the company was concentrating on insulation and energy conservation. Strassburger became one of the largest insulation contractors in Canada.

In 1977 a 16,000 sq. foot facility was built on Colby Dr. in Waterloo. The business encompassed the installation of blown fibreglass insulation for attics and walls, urethane sprayed in place foam and fire protection coatings (some of which were manufactured by Strassburger). Along with these products were coatings for exterior use, spray fibre acoustical coatings as well as cavity foam insulation and air sealing. Strassburger was well known as The Energy Plus Company a version of today’s Energy Star thirty years later.

In 1997 the insulation part of the business was sold. This allowed the company to focus all of their efforts on producing world-class fenestration products. A year later Strassburger began manufacturing a high energy thermal unit for their windows.

In 2002 another addition was added to accommodate the full line of PH Tech Boreal series as well the opening of a paint line which now boasts a wide range of standard colours along with custom matching capability.

In 2007 Strassburger had outgrown the Colby property and in 2008 they opened a new 92,500 sq. foot state of the art facility. At the same time, a satellite office and showroom was set up in Barrie Ontario to service the north and Ottawa regions. Growth expanded into the Windsor area as well as south into the state of Michigan. 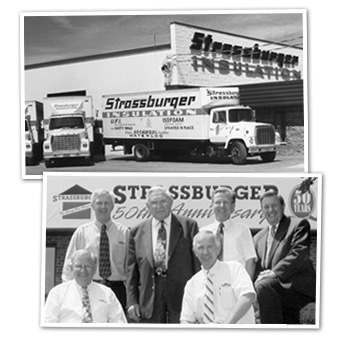